Over the past year, I’ve seen a dramatic increase in damage to air rifles, which is directly related to the use of Empty Chamber Indicators (ECI’s) or Clear Bore Indicators (CBI’s)…  The damage isn’t caused by the actual use of the ECI, rather it is caused when the rifle is stored, transported or even during Equipment Control Inspections.  I’ll be talking mainly about the Walther LG400, because I received one this week with the ECI installed.  However, the information I will share with you can be applied across all manufacturers and models.

The ECI is intended to accomplish a couple things, both of which are related to safety, and in my opinion a good reason to use ECI’s.  First, the ECI is used to prevent the action from closing, and indicate that the chamber is Empty- hence the name.  With air rifles, any object in the barrel can be a projectile, so the ECI may not be the best term- Bring on the Clear Bore Indicator.  CBI’s extend the entire length of the bore, and protrude from both ends, allowing Range Safety Officers (RSO), Athletes and Coaches to visibly ensure there are no pellets present in the barrel, making the job of the RSO easier, but still very necessary.  Which brings me to the second point; since the adoption of CBI’s in our sport, RSO’s have been able to more quickly, and without direct interaction with athletes, perform their largely unappreciated “job” as RSO’s.  Their ability to quickly view a Rifle/ Pistols condition of loaded v. unloaded without direct contact with the athlete, is of great benefit to the athlete who is attempting to focus and perform at a very high level.

The first point I made about ECI’s/ CBI’s preventing the action from closing is one key piece of information, which I will expand upon- the other point is not really intended for this article, but is never the less important for us to understand.  In the picture below, you will notice a Cleaning Pull Through being used as a CBI; it was installed, likely immediately following the last training session, and then packaged up and shipped to me for service. 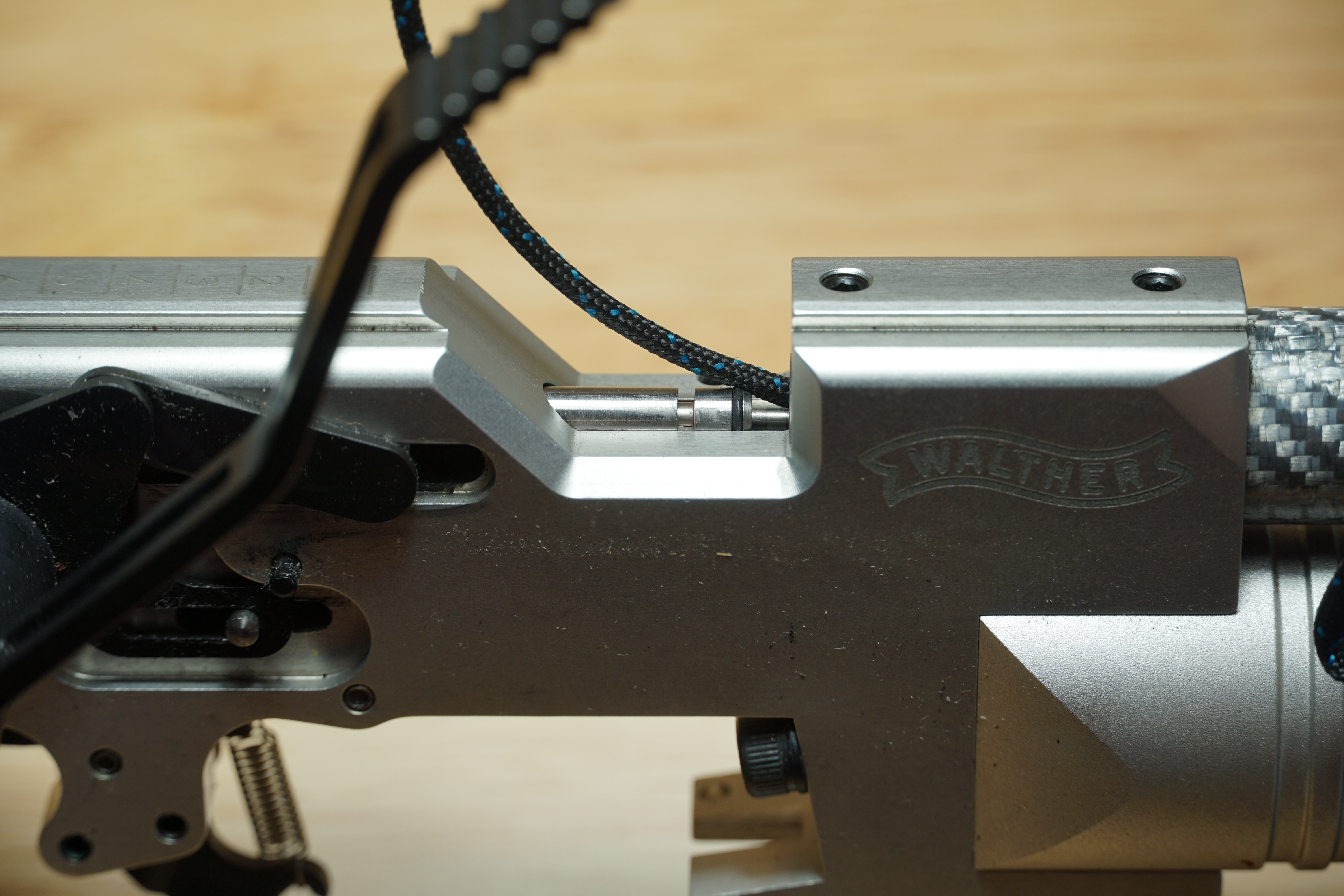 Although the CBI was installed for safety, and out of habit, doing so could cause costly damage and accuracy issues.  Damage is caused when the cocking-lever/ bolt-head is pressed forward, or an attempt is made to close the bolt.  The force could come from someone physically trying to close the bolt, but most often the damage is caused while the rifle is in the guncase (out-of-sight, out-of-mind).  In this case, undue force is applied to the cocking mechanism by the rifle, or case being bumped into some, set hard on the floor or in the truck bed.

Damage to the Walther LG400 will most often be to the small pin protruding from the bolt-head. The pin is responsible for properly locating the pellet in the chamber, as well as, indicating the presence of a pellet.  As you can see, the bolt’s forward movement is limited by the CBI, and some of the stress is exerted on the Pin- if the pressure is strong enough or occurs repeatedly, the pin will bend, preventing it from properly functioning.  With the pin bent, the pellet will not be located the same inside the chamber every time, nor will the loaded chamber indicator feature, function correctly.  The result of this is larger groups, not being able to call shots… Frustration!

Although the image is of a Walther LG400, each manufacturer will have their issues when it comes to CBI’s and damage to the rifle.  Anschutz for example, has a built-in weak point in the cocking-mechanism, which bends when too much force is placed on the system.  The Intermediate lever (part 007112) connects the main cocking-lever to the bolt-head, and due to the shape of the part, and the relatively soft steel, it will bend (more often than not) before other more expensive parts are broken.  I know this sounds bad, but in all actuality, it is great news for the owner or an Anschutz 8001 – 9015.  The result of the Intermediate Lever becoming bent, is a large gap roughly equal to the thickness of the CBI, between the bolt-head and breech.  Of course, this gap is allows all the air to escape, so the rifle is inoperable.  The fix for this is to straighten or replace the Intermediate lever- Never should you loosen the barrel and push it further back to close the gap.  Please, do not listen to the “Good Idea Fairy” and start remounting the barrel- The barrel is not the problem, nor is it the solution.

Now to the prevention part… although RSO’s may require you to have a CBI in the rifle while on the range, it is never advised to case the rifle or otherwise transport the rifle with a CBI through the bore.  If you must have the CBI in (for the rules and safety), I recommend placing the rifle in your case, then pulling the CBI forward (or completely out) so the bolt can naturally close when the case is sealed.  I’m not suggesting you should do anything unsafe, however, I am suggesting you do what is necessary to prevent damage to your $3000-$4000 competition rifle.  For our Range Safety Officers out there who are blowing their tops at the previous statement… I challenge you to assist our younger, less experienced shooters in safely casing their rifles and educate them about the potential for damage if they improperly store and transport their rifles.